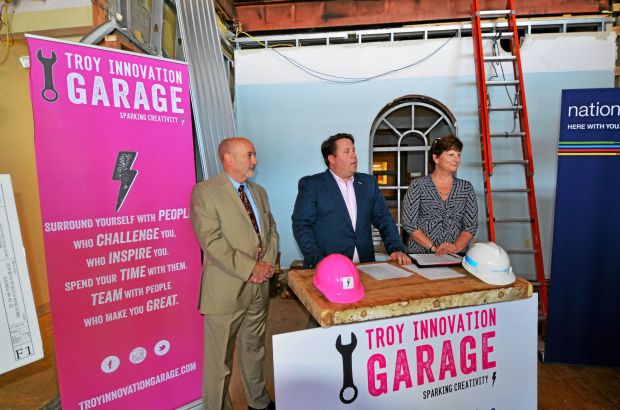 Gramercy Communications’ founder and CEO Tom Nardacci said more than $1 million will be invested in the two-story structure over the coming months to renovate the 14,000-square-foot space for both an incubator program and as Gramercy’s permanent home. The Troy Innovation Garage will be an entrepreneurial ecosystem specifically aimed at incubating, accelerating, fostering and growing creative economy companies in Upstate New York.

Work is still being done to update the once vacant building on Fourth Street in downtown Troy. Gramercy employees, National Grid representatives, elected officials and community members came to the innovation garage on Wednesday to announce this grant from National Grid.

“This project gave new life to a vacant building with its first tenant, Gramercy Communications,” said National Grid Regional Executive Director Laurie Poltynski. “The project cost more than $1 million and National Grid is proud to have supported this investment by providing a $50,000 Main Street Economic Grant. National Gird has provided more than $93 million in these types of grants across upstate New York since 2003 because economic growth benefits all of us.”

The City of Troy is also excited to see new life being brought to the once vacant building on Fourth Street.

“The Troy Innovation Garage is a game-changing investment in the City of Troy, said Troy Mayor Patrick Madden. “Not only will this project provide another badly needed foothold for positive change on the Fourth Street corridor, it will provide a support system for entrepreneurs. The fact that National Grid is investing in the Collar City is further proof that Troy is becoming one of the most prosperous and impactful places in the Capital Region.”

Nardacci says that this grant will help to ensure the success of the Troy Innovation Garage.

“This grant from National Grid will go a long way in ensuring our success,” said Nardacci.

National Grid also has a commercial lighting program and they wanted to provide even more than the grant to the innovation garage.

“National Grid dropped off 50 LED lights and exit signs for free that we can use in the garage,” said Nardacci. “So instead of having to use the old original lighting like how we had planned, we now don’t have to worry about that with all of these brand new lights.”

Nardacci expects that the Troy Innovation Garage will first have a soft opening this summer, with plans for a grand opening in the fall, around the same time Gramercy is expected to move in.

Once complete this summer, the building will have 75 co-working seats, 12 private suites that can accommodate companies of 1-5 people, as well as a variety of meeting and conference rooms available to members. There will also be two studios in the space aimed at specific sectors of the creative economy, including a multimedia studio with a green screen, sound booth and access to lighting and camera equipment.

“It is my firm belief that The Garage will help the creative business leaders of tomorrow succeed, our community continue its renaissance story and our clients to be even better served by Gramercy,” said Nardacci.