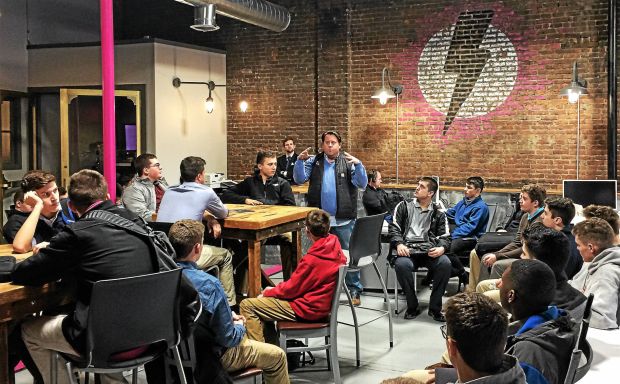 TROY, N.Y. >> The buzz of power tools and other sounds of construction filled the Troy Innovation Garage on Wednesday as work continued to convert the long-vacant former car dealership and ballroom into a centerpiece of the city’s growing entrepreneurial community.

On the building’s second floor, however, a different kind of building was going on, as the garage and its main tenant, Gramercy Communications, welcomed more than 25 students from La Salle Institute for a day of presentations and collaboration to help them better understand marketing and how it can play a crucial role in the success or failure of a business. From establishing personal and professional brands to the effective use of marketing to spread their message, the high-schoolers learned the ins and outs from professionals both with Gramercy and other tenants in the garage, which opened last year, offering shared workspace and other facilities and services for entrepreneurs.

Wednesday’s program was offered by Tom Nardacci, owner of the garage and Gramercy and a 1992 La Salle graduate who said the school taught him many of the skills that helped him to find success both professionally and personally.

“I learned to give back [to the community] at La Salle,” Nardacci said in welcoming students Wednesday morning. “I learned to be respectful at La Salle. You have big decisions ahead of you about what’s next [after high school]. You guys have or are developing this moral compass, [and] if you follow that line, you’ll never go wrong.”

Programs like the one held Wednesday are an important part of a La Salle education, said Mike Levy, chairman of the school’s business department, providing students with the academic knowledge to be successful and the practical knowledge and experience often lacking in traditional programs. Taking them out of the classroom is important to show them how to apply what they learn, he said, as well as how to work with others and present themselves professionally.

“While other schools have been cutting back on business programs, we’re expanding ours,” explained Levy, who worked in the private sector for more than a quarter-century before going into education, first as a teacher at Shaker High School for 10 years before coming to La Salle in 2013. “We’ve built a model that can be emulated by other schools if they have ingenuity, creativity.”

After Nardacci welcomed the students, they sat down with Gramercy staff and other garage tenants, including Erik Bunaes, president of Endorphin Advisors, a marketing strategy and technology company, and Jesse Gardner, owner of Plasticmind Design, web development and design business, to learn the ins and outs of the business. They then sat down in groups and worked with the professionals on marketing projects for real clients such as Sunmark Federal Credit Union.

Nardacci said the program meshes perfectly with his vision of the garage as an incubator where young entrepreneurs can pursue their ideas with the support not only of the garage and its staff but also others who use the shared workspace. As someone who followed the entrepreneurial route to success, Nardacci encouraged the students not to wait to follow their dreams, pointing out as an example brothers Guha and Karthik Bala, who as teenagers founded Vicarious Visions, an award-winning video game company based in Menands responsible for developing such games as the Guitar Hero and Skylanders series, and recently opened Velan Studios in Gramercy’s former offices on River Street after selling Vicarious Visions to video game giant Activision.