Creative Economy discussed at first Albany Roundtable of the season 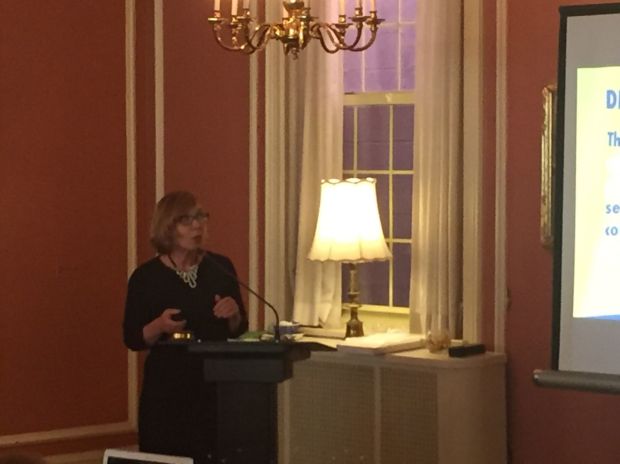 ALBANY, N.Y. — On Wednesday afternoon, Maureen Sager told a full room about the Capital Region’s Creative Economy at the first Albany Roundtable luncheon of the season.

Sager, the executive director of the Upstate Alliance for the Creative Economy, shared information about opportunities in the area, the recent successes and ways for the Capital Region to draw more awareness.

According to Sager, the creative economy includes economic activity involved in the origination, production and distribution of goods and services in which artists and cultural content gives the product or service value in the marketplace.

Sager, who also serves as executive director of Spring Street Gallery in Saratoga Springs, highlighted the four areas of the Creative Economy. Some, like Saratoga Performing Arts Center and Proctors, are obvious as they’re arts and cultural institutions. There are also community-centric organizations, like Albany Barn and Youth FX, which provide the necessary infrastructure for up and coming creative businesses. Sager explained there are about 1,500 creative businesses in the area, with an average of 10 employees per business.

Sager shared the number of visual, performing and museum art-based jobs being over 7,600, but she explained there’s more to the Creative Economy than those jobs. She mentioned jobs in architecture, media, graphic design and culinary arts that add to the creative industry. In fact, the creative industry make up 35,618 jobs, earning $1.4 billion a year, which ranks fourth behind health care, food and manufacturing among sector jobs in the area. It’s important the Capital Region continues to advertise itself as a leader in the creative industry, she said.

The Albany Roundtable presented its prestigious New Patroon Award to Tom Nardacci, developer of the Troy Innovation Garage and the new Bull Moose Club in Albany before Sager spoke. The co-working spaces support the creative economy by giving people the resources they need to fully tap their potential and let ideas run free.

The luncheon was sponsored by The Rosenblum Companies. The Albany Roundtable is an all-volunteer, not-for-profit organization that presents a unique opportunity for people from around the region and from all walks of life to gather to hear speakers with diverse viewpoints on timely subjects.