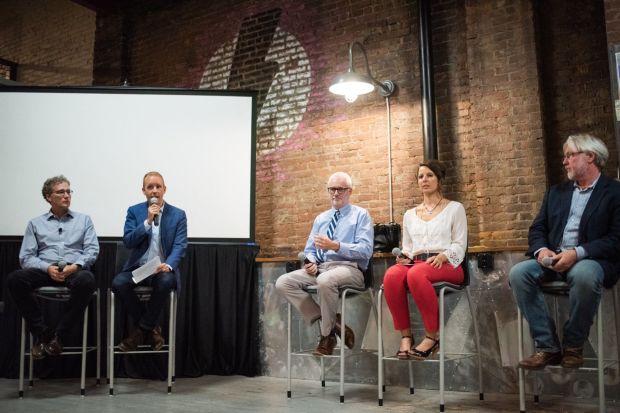 TROY, N.Y. – The Troy Innovation Garage will host a dynamic series of keynote lectures and masterclasses exploring issues of cities, design and climate change featuring nationally-recognized experts that will address “The Future of Small Cities” at a depth and diversity unique to the Capital Region.

For the 2019-2020 season, titled Garage Talks, the ambitious programming will focus on myriad issues, from waterfront redevelopment and use, to public transportation, to the role of public art in communities.

Each installment of the multi-month series will feature not only a presentation from a visiting expert, but also includes a panel of local leaders and thinkers from the Capital Region that will respond to the visiting speaker’s case study and engage the audience.

The season is being hosted by Reif Larsen, the 2019-2020 Writer-in-Residence at Troy Innovation Garage. He is the author of several bestselling novels, including The Selected Works of T.S. Spivet, and has written for the New York Times, GQ and other publications about urbanism and cities.

“Troy and the Capital Region is in the midst of a series exciting changes and now is the time to define what kind of direction we want our cities to evolve in, particularly when it comes to confronting climate change,” said Larsen.

“One of the great things about living in a small city is that there is room to affect this kind of change. There is room to try things out, freedom to take risks, and dream big. The future of the country will be in the health of its small cities,” Larsen added.

Larsen says the goal of Garage Talks is to break down silos of provincial thinking, to embrace the idiosyncrasies of the region, and to draw out connections, lessons, and best practices from across the world.

Garage Talks will also include an accompanying series of masterclasses for a small group of regional thinkers and doers to deepen the conversation and lead to policy suggestions and regional goals. Moving the region forward in a meaningful and achievable way is an important priority for the series, as is sparking thoughtful dialogue.

“I believe deeply that the success of our nation is directly tied to the success of Main Street in small cities whose fortunes are once again on the rise,” said Aurelius Coworks CEO Tom Nardacci.

“A variety of global issues – not just national ones – pose a juxtaposition of threats and opportunities for small cities. This conversation is long overdue and worth having in a way that shares knowledge and resources with the hundreds of cities looking to make the moves that will ensure their long-term sustainability,” Nardacci noted.

Nardacci hopes the “The Future of Small Cities” initiative will bring new perspectives, insights, and energy into the discussion. He looks forward to not only bringing such an accomplished group of problem solvers to the Capital Region for the first time but to doing so in a way that closely involves those who are already working to make positive change.

All Garage Talks discussions will be open to the public. Speakers, topics, and dates are as follows:

For more information on “The Future of Small Cities” and the Garage Talks season, visit futureofsmallcities.com.