Troy Innovation Garage
All Over Albany

Troy Innovation Garage | All Over Albany 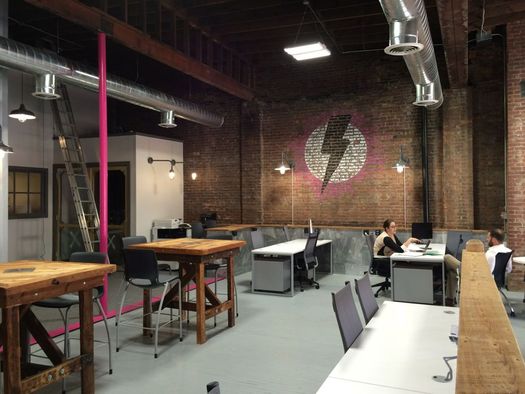 The project is backed by Tom Nardacci, the founder of local PR and marketing firm Gramercy Communications, which also has offices in the building. And it’s probably the largest-scale attempt so far to open a co-working space similar to what you find in large cities.

Here are a few more details, along with a look around…

Co-working can mean a range of situations, but generally speaking, the term refers to a flexible, drop-in office/space/place where a group of people who don’t work for the same company all can work.

The idea is probably as old as offices, with informal or side agreements allowing people to use an extra space or desk. But over the last decade co-working has become a widespread setup in many cities as more people work remotely or “from home” or freelance. And many companies have popped up to own and manage the spaces. One of the big chains — a company called WeWork — has more than 70 locations and is said to be valued at $16 billion.

There are a few different reasons why these spaces have become popular. One is cost — especially in big cities, it can be cheaper to buy a co-working membership than it is to set up your own office with rent and the associated expenses. Another reason is that people like the company of having other people around. Working by yourself at home all day, or wherever, can be isolating. So having other “coworkers” around to chat with now and then — or maybe even lend some advice or help pitch in together on a project — can be attractive.

We get the sense the co-working trend hasn’t taken root as strongly in the Capital Region as it has other places (at least, maybe not yet), but there are a handful of setups around the area including the Beahive in downtown Albany, the Tech Valley Center of Gravity in Troy (it’s one part of the programming there)*, and Sharatoga Coworking in Saratoga Springs. (That is not a comprehensive list.)

So, what’s the story of Troy Innovation Garage? 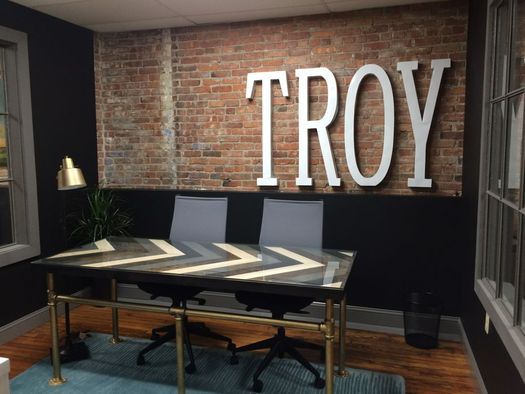 Right, back to the Troy Innovation Garage. As mentioned, it’s backed by Tom Nardacci of Gramercy Communications. As he explained during a tour of the space, he had been looking at possibly expanding Gramercy to other cities upstate, but the prospect of logging all those miles along the Thruway wasn’t exactly appealing. While he was out in Buffalo investigating a potential expansion opportunity, he got a look at a business incubator space there and that got him thinking about a different idea: a co-working space for Troy.

Nardacci said he ended up visiting about 30 co-working spaces around the country in an effort to find out what works (and doesn’t), as well as to get a better sense of what shape he wanted the Troy Innovation Garage to take.

The result: A $1 million investment in a building and renovation that includes offices for Gramercy in the back, and in the front a co-working space with plenty of different desk arrangements, nooks, and conference rooms. And to go along with that space, a goal is to develop a friendly, flexible, collaborative atmosphere among the members.

“It’s all about the community,” Nardacci said, explaining that sees the space as an opportunity for startups and small businesses to support and learn from each other. “We want it to be a successful business, but it’s much more than that.”

Toward that end, Nardacci hired Michelle Schroll to work specifically for the Troy Innovation Garage as a community manager, to help coordinate events, connect members, and keep things running smoothly. 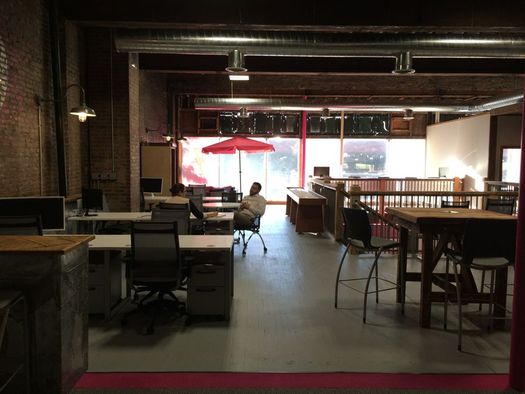 Cost
Membership plans start at two drop-in days per month for $60. And the per-day rate gets cheaper as the number of days per month increases. (A membership with 24/7 unlimited access each month is $350, or a little less than $12 per day.)

Nardacci said he figures that most members will end up with an average cost of about $20/day. He also said that they’re still making changes as things evolve — and it sounds like they’re open to being flexible — so if there’s a different sort of arrangement that you might be interested in, it’s worth asking about it.

Spaces
The co-working space includes 75-90 “seats” depending on the configuration. They plan to cap membership at about 200 people.

As of last week, Nardacci said they had about 15 members. He figures they’ll eventually need about 75 to make the numbers work.